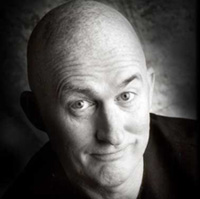 Tony has been in the entertainment business for over thirty years. His show is versatile and has been performed for a wide variety of audiences. From being presented as feature comedian at the National Radio Awards in Toronto to performing at the 33rd Annual Premiers Conference in Charlottetown, he easily adapts to the mood of any audience.

For 13 years Tony played a weekly musical comedy matinee to a packed to capacity crowd on the Halifax Waterfront. He was an MC and feature comedian at the Halifax Comedy Festival, and has been a special guest of the Royal Canadian Air Farce. Tony has also co-hosted the CBC radio show Atlantic Airwaves with Natalie MacMaster.

Tony’s unique talents and personality have attracted the attention of many advertising agencies. He writes and performs a wide variety of character voices for television and radio as well as industrial videos.

A former student of the Royal Conservatory of Music in Toronto, Tony still indulges in several musical projects, as a singer, guitarist and producer.

Whether as an emcee or guest speaker for an event, Tony’s innovative and unique style of musical comedy is unforgettable. His tailored show and quick wit make him a favorite at conferences, conventions and dinner speaking events. He can stand in front of any crowd and make them feel good. They are drawn into the show with its fast paced comedy and music, impersonations and musical treats.

Tony Quinn was contracted as our Emcee at the RE/MAX Atlantic Canadian Awards Gala on January 28, 2017.  The event was attended by 250 award winners and it was Tony’s function to introduce the presenters, announce the winners, coordinate the timing of the presentations, tell amusing stories, fill in the dead air, and inject humour whenever necessary. Tony was a consummate professional before, during and after the event.  He was high energy and his brilliant ad lib skills and sense of humour kept the crowd entertained.  We have had nothing but positive feedback from the attendees.  It was a pleasure working with Tony and we would not hesitate in having him back!