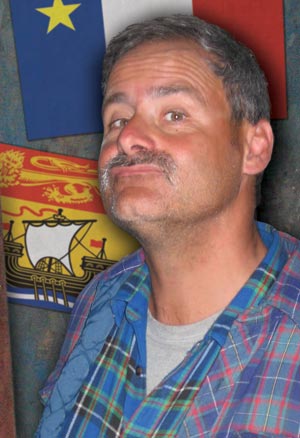 Lucien, the opinionated North Shore mill-worker and New Brunswick’s Blue-Collar Philosopher first appeared in Fredericton, N.B. as part of a satirical Bicentennial revue, Maritime Mixed grill. The character was created by New Brunswick theatre artist Marshall Button, who put together a two-minute monologue for what he thought would be a brief dinner-theatre appearance in February 1984. Over the ensuing two decades, the character has evolved to the point of assimilating well-over eight hours of bilingual material, which has found its way into four different full-length plays; LUCIEN, LUCIEN’S LABOUR LOST, LUCIEN SNOWBIRD and LUCIEN FOUR: HELTER SMELTER. He has contributed countless commentary performances for CBC Radio and Television, including a guest appearance onRoyal Canadian Airfarce, and on Sportsnet during the 2006 Memorial Cup Hockey Tournament. Marshall has performed Lucien well over fifteen hundred times, from coast to coast in every Canadian province, and has appeared regularly during Moncton’s HubCap Comedy Festival.

It’s always fun to sit back, relax, and “take a break” with Lucien.

”Marshall Button as Lucien is a cultural icon … Lucien is a kind of gift from Button to the rest of the country, an Acadian blessing of laughter and perspective and from the heart wisdom … In the 10 years since he strolled on the stage, mangling the language but never the heart and soul behind it, Lucien has become a Canadian cultural icon.”