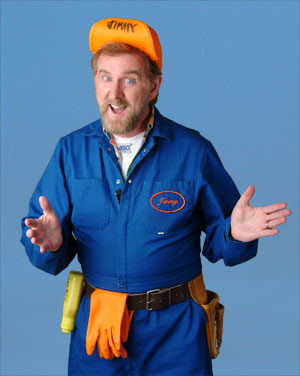 Sandy Gillis is a native Cape Bretoner now living in Prince Edward Island. After 25 years in broadcasting he retired as partner and an Operating Director of the Maritime Broadcasting System to pursue his “funny business” as comedian “Jimmy the Janitor”. The jovial janitor has 11 CD’S to date, a successful nationally syndicated radio show, many comedy appearances on CBC Radio-TV and the Comedy Network, is a founding member of “Late Night Live”, the Hub Cap Comedy Review, has one movie under his belt, was a principal player in the TV series “Daring and Grace” and performs at conferences and theatres in Canada and the United States.

Sandy and wife Kathy have five pretty much grown up children, and three grandchildren.

Is Jimmy your real name?

No, my real name is Alexander (Sandy) Gillis. My character is James (Jimmy) Patrick MacDonald. Jimmy’s folks named him after “St Patrick’s Day”. His sister “Ground Hog” wasn’t quite so lucky!!!!

Are you really a janitor?

I’m not really a janitor, but I play one on TV! Actually a broadcaster for 25 years, I’m now retired and “playing” around the world!

Where did the character come from?

I created Jimmy to appear on one of the radio stations I managed back in 1987, and he’s been going strong since.

What is the most enjoyable thing about doing comedy?

For me it’s knowing what “punch line” is coming, and seeing it happen!

How do we get a Jimmy the Janitor live show in our community?

Pretty simple really. Invite us! We perform for conferences, banquets, fairs and festivals. We can even rent your local theatre and present an “open to the public” two hour comedy show! Hit the Book Jimmy tab on the left side of this page and send us a note!

Where are you from?

I was born and raised in the lovely island of Cape Breton and Jimmy is based on the characters I grew up with. I’ve lived in all four Atlantic Canadian Provinces and now reside in beautiful Prince Edward Island, the home of fabulous people, beautiful beaches, Anne of Green Gables and of course Jimmy the Janitor!

Is Jimmy single or married?

That’s a very good question, and a funny one to answer. When I created Jimmy I made him a divorcee. That allows him to do all the “married” jokes about the “X”, and still talk about the new “girlfriend”. A slight complication is that I’m married (which is a great thing…if you are reading this dear) and I wear a beautiful Celtic wedding band that I don’t take off. Therefore when I appear as Jimmy, not only are you blinded by his royal blue coverall and orange hat, but you’ll see he’s wearing a wedding ring. Quite confusing for poor Jimmy! (ha-ha)