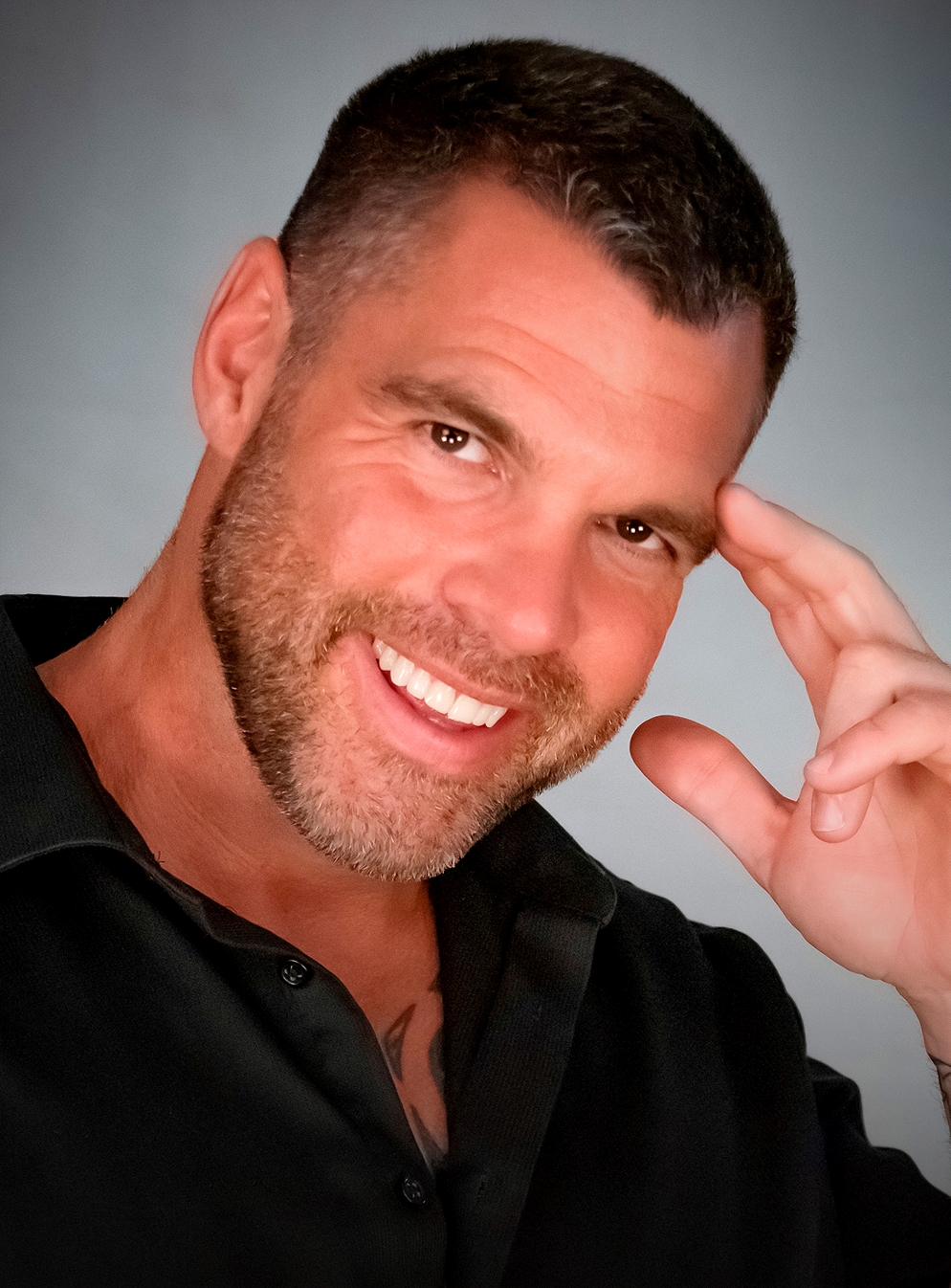 Born in the small coal mining village of Minto, NB and son of country music legend the late Joey Knight, Jason has always been loved for his big heart, quick wit, great sense of humor, family values and charismatic personality. Like a true Canadian boy, Jason has always had a love for hockey combined with talent and skill.  During his hockey career, Jason played on AAA hockey teams and received many awards including MOST VALUABLE PLAYER.  His success led to an invitation to try out for a Junior A hockey team in Ontario.  His hard work and dedication earned him a position on the team which led to many other opportunities.

Jason fostered his love for magic and hypnosis at a very young age and is now called “Canada’s Stage Hypnosis KING” by the country’s entertainment capital, Niagara Falls. Jason began touring at the major theatres/casinos across Canada and very quickly had one of the hottest tickets in town.  Audiences are completely blown away by his highly entertaining world class shows coming from everywhere to experience the laughter and thrills.  Jason continues to pack the theatres more and more each and every year and major corporations regularly hire him for headline entertainment at their company events.

He still enjoys playing hockey, weight lifting and golf but his real dedication belongs to his wife Catherine and daughter Chloe.  He values the time he spends with them.

HYPNOTIST CYRUS - A SHOW UNLIKE ANY OTHER!!

Hailing from New Brunswick, Canada, the highly anticipated showman extraordinaire and ROCK STAR HYPNOTIST Cyrus brings you the hottest theatrical concert of hypnotism in North America.  Audiences everywhere are mesmerized saying, “That was the greatest, funniest show I ever saw!” Cyrus’ shows are filled with fun, high energy and non-stop laughter!  The interactive entertainment value is beyond compare!  Expect nothing less than sensational when you watch Cyrus in action!  Cyrus provides an incomparable professional, entertainment experience that has been proven time and again to exceed the expectations of audiences everywhere.

A Fan Favorite, Cyrus is single handedly changing the face of stage hypnosis entertainment with fans coming from everywhere to be put under his spell.  With his unmatched stage presence and magnetic personality, Cyrus works his crowds with a practiced flair.  Comfortable with all types of audiences, Cyrus’ entertainment style is comedic, enthusiastic, energetic and sincere it is never dull, dry or clinical.  Cyrus’ love of entertainment, his appreciation and respect for his audience and participants is apparent and appreciated by all.

As Cyrus develops a strong connection with his stage volunteers, they soon surrender to his power of suggestion to become talented musicians, hilarious ballet dancers and rock and roll legends giving the audience a show to be remembered!  That means you too could become a star!  Guests are engaged and encouraged to participate in a wide variety of demonstrations designed to leave spectators amazed and thoroughly entertained.

The fun, the thrills and the uncontrollable laughter are all part of the most hilarious journey into the mind you will ever take!  Come witness the power of hypnosis and be blown away by this unforgettable show (unless he tells you to forget it). 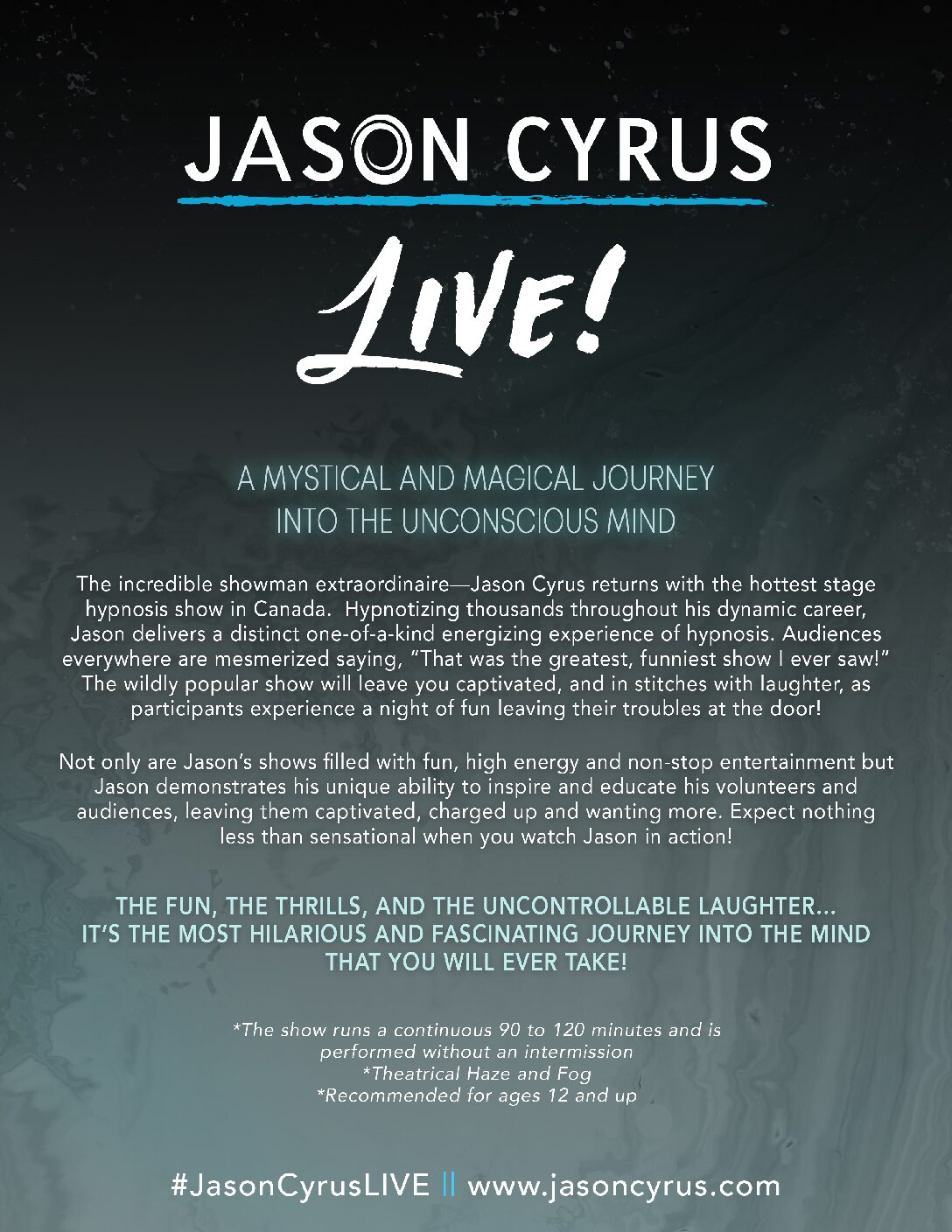