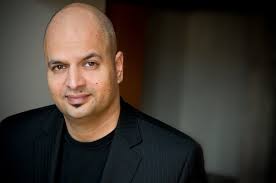 Ali Hassan is a stand-up comic and actor and radio personality who has performed for audiences across Canada and internationally.  He is a Canadian Comedy Award nominee who has performed at the Just For Laughs Festival in Montreal, Toronto’s JFL42, the Winnipeg Comedy Festival, and now tours his solo comedy show Muslim Interrupted around Canada and internationally.  He has also performed twice in the Middle East, and at the Edinburgh Fringe Festival in Scotland. In the fall of 2019 he is one of the featured artists touring Canada with the Just for Laugh’s Comedy Night in Canada Tour hosted by Rick Mercer.

CBC fans will recognize Ali as the host of Laugh Out Loud, a frequent guest-host of q, the leading arts and culture program in Canada and the US, and the host of Canada Reads. Ali was recently in the Netflix holiday film The Holiday Calendar, and this summer will be in the films My Spy and Mafia Inc, and in the CBS action series Blood & Treasure.  His other acting credits include Designated Survivor on ABC and FXX’s Man Seeking Woman, PBS Kids’ Odd Squad and CTV’s Cardinal.